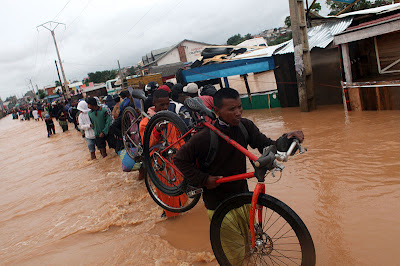 In response to Cyclone Giovanna which hit Madagascar on the 14th of February, Money for Madagascar has now launched an appeal to help the victims.
Now that electricity and phone lines are being restored we are receiving pleas for help from our trusted partners on the ground.
Watch this space for details very soon.
If you are keen to help now you can donate through our website. Many thanks from the MfM team.
Posted by Irenée

Madagascar’s aye-aye (Daubentonia madagascariensis) is the world’s largest nocturnal primate and probably the weirdest too. If you go out for a Malagasy moonlit stroll you are very unlikely to find one of these Near Threatened lemurs. So peculiar is their behaviour that it is hard to believe that they are distant relatives of ours! If you want to see them in action check out recent BBC films such as ‘Last Chance To See’, ‘Deadly 60’ or this clip from ‘Predators’ http://www.bbc.co.uk/nature/life/Aye-aye#p009yp79.The community conservation work of Money for Madagascar has inspired one of our supporters to write this ode to an Aye Aye. 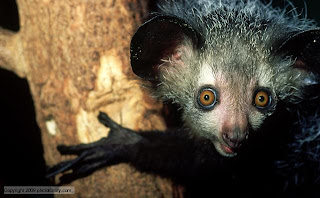 Can I really be looking
at a close cousin
sharing the same home planet?
More ET than aye-aye
rapidly
pecking
with its witchy middle digit
on a treetrunk in the dark,
pressing damp hairy snout
close to the bark
ready to sniff out
the grub, gnaw the rotten wood, insinuate
that dark, elongated
twig of a middle finger deep
along beetle tunnels till the tip
senses the cowering larva, impales
fat flesh on one horny nail
whips it out, pushes it
between thick
lips, rolls up its orange stare in ecstasy
so like that look of glee
with which George Melly
covering Bessie Smith
would dip his fingertip into an imaginary
jelly roll
or sugar bowl
then suck in bliss.
Had the ancients met the lemur
when they dubbed the middle finger
digitus impudicus?
had they been discomposed
by that same nocturnal glare
when they proposed
obscene gesture -
giving the bird, showing the fica -
as one way to avert
the evil eye (aye)?
had they ever supposed
one could feel pity for a maggot?

Thanks to Stevie Krayer for sending in her poem.
Posted by Irenée

Can rice save the Madagascar forests? 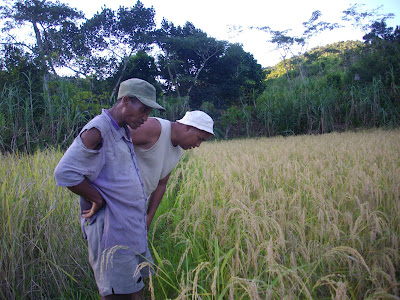 In the Betampona forest of Madagascar our MfM team has been teaching SRI rice production for over a decade. Instead of cutting down rainforest to expand their rice fields, farmers have been able to feed their growing families by growing rice more intensively in the land that they have. Thanks to this new technique the farmers of Betampona are producing between 5 and 7 times more rice than they used to. At last they can enjoy improved food security (enough rice to eat!) without needing to slash down the forest and wipe-out endangered species. In addition MfM is helping farmers to diversify their crops so they can feed their families well throughout the whole year. Families in 73 villages surrounding this special forest reserve are now producing surplus crops like rice, vegetables, wood, honey, palm trees, coffee, fruit and spices, so they can generate cash to pay for medicines and education for their children.

5 years ago MfM's work in Betampona was recognised by the Malagasy Government as a 'model' project to be emulated across Madagascar. But progress has been slow. While the price of rice has doubled in the past 2 years, much has been left to humble NGOs working with scattered communities to try to help the Malagasy to grow enough rice to eat. But with the Malagasy Government making SRI rice production a 'priority' in 2011, could there be hope to bring improved food security to Malagasy people?
Follow this link to feature on SRI rice production in Madagascar:
IRIN Africa MADAGASCAR: The “less is more” philosophy of rice production Madagascar Economy Environment Food Security
Posted by Irenée