FAMINE PREVENTION UPDATE: An overview of MfM’s work to help vulnerable families rebuild their lives in the wake of prolonged drought followed by cyclone Enawo.

Despite being one of the world’s lowest emitters of carbon dioxide, Madagascar, is numbered amongst the  ‘Vulnerable Twenty’; a group of nations that  will see their future development severely impacted by climate change. Already this year, we have seen the south of the Island afflicted by such extreme drought that 850,000 people were taken to the brink of famine. Further north, in and around the capital, Tana, drought caused severe power cuts (no water to drive the hydroelectricity!) and crop failure. Just as the rains returned and people began planting, cyclone Enawo hit the island, leaving flooding and devastation in its wake.

Your generous response to our appeal for those at risk of famine could not have been more timely! Funds were rapidly distributed to our partners enabling them to meet the immediate nutritional needs of four communities and start them on the road to recovery:

In the South, our partner SAF has been working with all 150 households in the drought stricken community of Beloha Androy. To meet immediate nutritional requirements we delivered 19 tonnes of rice, 4 tonnes of beans and 1500 litres of vegetable oil to starving local families.


Supplies were distributed through a system of food for work. This enabled local households to recover from acute hunger whilst improving key community facilities. Tasks were identified and prioritised by the community to ensure that they responded to local needs. Vital works undertaken included: planting trees and protective hedges, cleaning and restoring the community water tanks and building new class rooms.


Give an extra special present this Christmas to some of the poorest people in the world! The MfM calendar, Christmas cards and a range of Alternative gifts are available from our on-line shop on the MfM website: 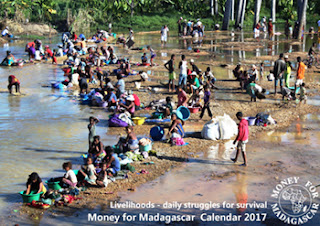 Celebrate Madagascar all year round with our 2018 calendar. Focusing on local livelihoods, the photos show the strength and positivity of the Malagasy people through the struggles of daily life. Calendars cost £7.50 each (inc. free UK postage).

We also have a choice of 2 seasonal greetings cards 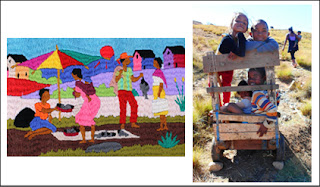 The first is a colourful market scene entitled “Fish for a Feast”. The second shows the joy of playing (“Joie de Jouer”) with smiling Malagasy children helped by Money for Madagascar.

Cards cost £4.50 per pack for 10 cards and envelopes including UK postage.


Are you looking for a different gift this Christmas...

If you are fed up with giving or receiving yet more socks, toiletries or chocolates… you can bring the gift of joy for someone in Madagascar? It's simple really... visit our online shop and choose an 'Alternative Gift' like schooling, hot meals or precious trees...something that is desperately needed in Madagascar. Then you either buy it for your friend or you could ask your friend to buy an alternative gift for you. That way you can be sure this year’s Christmas present will be VERY much appreciated by you and your friends and especially by the people in Madagascar whom you have chosen to help. 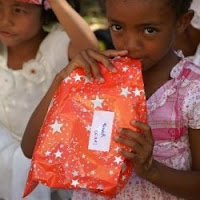 Put a smile on a Child's face this Christmas...

Money for Madagascar works with childrens centres which care for 1000 vulnerable children and young adults.

While you are tucking into your chistmas lunch, know that thanks to your generosity a child in Madagascar is doing the same.

Just £10 could buy a Malagasy child a Christmas meal and present. 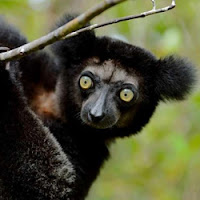 Over 80% of the flora and fauna of Madagascar is found nowhere else in the world but only 20% of its original forest remains. The rich biodiversity is at risk.

£20 could fund the planting and aftercare of 20 native forest trees.


These gifts and many more can be found online on the MfM shop.


Don't delay, get your gifts now!

Thankyou for your support.
Posted by Francis Phillips

One of Madagascar’s biggest current medical problems is nothing new, it has simply struck the wrong place at the wrong time. The Plague killed millions in England between The 14th to the 17th Centuries. Thankfully though, England and Europe got this under control. Unfortunately, some centuries later in Madagascar, the battle is still on. The only solution?  Madagascar needs our help to win.

Recently there have been outbreaks of pneumonic and bubonic Plague in Madagascar but these are the facts you need to know. The outbreak in Madagascar started in August and has killed over 120, whilst it is thought to have infecting almost ten times as many – the WHO believe over a thousand people may have been infected (1). This form of the Plague seems to have come from animal bites and then passing from human to human. Geographically, the outbreaks started in the east of the country, and worryingly also in the capital – Antananarivo. (2)

Still, on a more positive note, responses have been quick.  At a national level, many precautions are being taken, such as trying to prevent infection by holding fewer large gatherings. Madagascar has also reacted quickly to safeguard some of the more vulnerable – for instance closing schools and universities. (2) As with any epidemic, the most important thing is to get medication to those who need it quickly, and The World Health Organisation is not failing it’s duties. Since the outbreak, WHO has delivered the required medication for 5,000 infected people, whilst also distributing medication for 100,000 who may have been in contact with those infected (3). The Government have also taken practical actions, creating helplines and preventing the spread of ‘fake news’ which had spread on social media. Aside from these national measures, at a local level, there are consistent efforts to trap infected insects and also the mass spraying of insecticides. Another innovative response, by The Red Cross, has been to work on removing the stigma attached to those who are possibly infected, meaning they will be more willing to come forward and seek medical help.

One thing is clear – Madagascar needs help and it needs it quickly. Money For Madagascar works on the front line and has a proud record in providing basic needs such as clean water, better sanitation and also health education so that problems can be found and dealt with more quickly.

If you feel that you could play a part in making a direct difference in Madagascar’s time of need, please consider making a donation at https://moneyformadagascar.org/  – anything you give will go to those who need it most, Thank You.