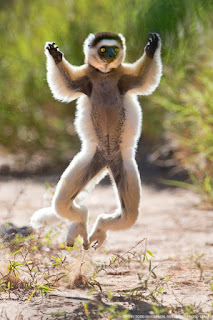 We would like to alert you to Part 2 of a new 3 part series on BBC 4 called Nature’s Wonderlands: Islands of Evolution.

Episode 2 titled “Madagascar: A World Apart” is scheduled for Monday 25th January at 9pm. It examines how Madagascar is a natural laboratory of evolution and introduces the viewer to the amazing species that inhabit the island.

Our partner Association Mitsinjo is featured in the episode. They are involved in extending the forest corridor around Andasibe National Park.

More details from the BBC website  which highlights the following (http://www.bbc.co.uk/programmes/b06yrgvr):
This series examines, “some of the crucial influences on natural selection that are normally overlooked - like geology, geography, isolation and time - the series reveals that there's much more to evolution than 'survival of the fittest'. Charting the lifecycle of islands - from their birth and colonisation to the flowering of evolutionary creativity that often accompanies their maturity, and what happens when an island grows old and nears its end - Fortey encounters wild lemurs in the rainforest of Madagascar, acid-resistant shrimps in the rock pools of Hawaii, and giant wolf spiders in Madeira as he searches for the hidden rules of island evolution.

In the second episode, Fortey travels to the rainforests of Madagascar - an ancient island that has spawned some of the most extraordinary groups of plants and animals anywhere in the world. From beautiful Indri lemurs, toxic frogs, and the cat-like giant mongoose called the fossa, to evolutionary oddities like the giraffe-necked weevil and the otherworldly aye-aye, he uncovers the secrets of the evolutionary niche - examining how, given millions of years, animals and plants can adapt to fill almost any opportunity they find.”

To find out more about the work that Association Mitsinjo does please visit:
https://associationmitsinjo.wordpress.com/reforestation/ 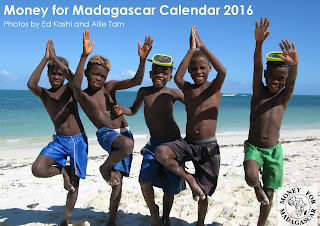 In the 2016 calendar, Ed Kashi and Ailie Tam offer glimpses of a beautiful country where life continues to be hard (though not always miserable!) for those eking out a living against the odds of poverty, environmental change and global warming.

For UK customers, calendars are now reduced to only £5 (including p&p)!

Every purchase helps to support the work of our partners who are tackling many of the key issues facing Madagascar today including: extreme poverty, loss of bio-diversity, poor health, lack of food security and limited access to education.

To make an order please shop online at MfM SHOP


Thank you for your support!
Posted by Sunita Abraham