"Vision without action is just a dream; action without vision just passes time; and vision with action can change the world!"
Nelson Mandela
Posted by Irenée 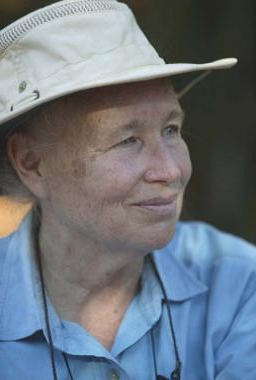 It is with sadness that we share with you the death of our dear friend and supporter Dr Alison Jolly. Alison was a renowned world expert on lemurs, who cared passionately about conservation and development in Madagascar. We were honoured to count Alison amongst our dedicated supporters. In recognition of our work she recently said:
“I applaud Money for Madagascar’s local level, long term, investment and involvement. This is the only real way to help local people conserve their own environment”

We thank Alison for her important contribution to science, for her support to our charity, and for her friendship. By supporting forest communities in Betampona and Melaky MfM helps to protect the forests upon which Madagascar's lemurs depend. Although our friend is now departed, it will be our pleasure to continue this community conservation which Alison valued so highly.

The tribute below will take you on a journey through Alison’s career as an eminent primatologist. 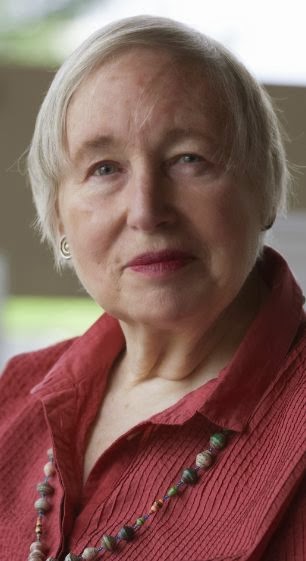 A chance invitation to babysit laboratory lemurs at Yale University in 1959, where she was a graduate student immersed in the study of sea sponges, triggered a change of direction and a distinguished career as a primatologist for Alison Jolly, who has died at home in Lewes, East Sussex, aged 76.

Driven by a commitment to the wildlife, ecology and development of one of the world’s poorest yet most iconic countries, Madagascar, Jolly became an expert on lemurs. David Attenborough recently wrote: ‘not only they but the people and land of Madagascar captured her heart’.

She made her name as the first scientist to do an in-depth account of the behaviour of the ring-tailed lemur, L. catta, beginning field work in 1962. She discovered that this species ‑ and as it turned out most other lemurs ‑ have female dominance over males, breaking the then orthodoxy that primates were male-dominant. As she later observed, the ‘king’ of the DreamWorks animation Madagascar ought to have been a ‘queen’.

Jolly also pioneered the argument that the evolution of intelligence has more to do with social behaviour than ecological factors. When she published her breakthrough Science paper in 1966, many thought intelligence evolved to master simple tools. Jolly speculated that more likely it evolved through the challenge of maintaining complex social relationships, a position now taken for granted.

Working primarily in the south of Madagascar at Berenty, a private reserve of forest set in a semi-arid desert, her forty-year research of ring-tailed lemurs expressed a love and scientific fascination for another species and its environment. Lords & Lemurs: Mad Scientists, Kings With Spears, and the Survival of Diversity in Madagascar (2004) is a compelling account of her work and connections with the local Tandroy population and the aristocratic semi-feudal French landowners, the De Heaulmes.

Jolly’s perceptions were articulated with precision and clarity, notably in her classic textbook The Evolution of Primate Behavior (1972), and later in a consideration of the evolution of co-operation and inter-dependence, Lucy’s Legacy: Sex and Intelligence in Human Evolution (2001). These and other works reflected her position as a woman challenging the individualist bent of masculinized sociobiology, though her passions were directed towards conservation and ecology rather than feminism. Her achievements were remarkable for a mother of four who never had a full time faculty position.

Her approach to lemur life was holistic, arguing for approaches which worked with local people and government, and in particular nurturing a generation of Malagasy scientists, sometimes at her own expense. In many ways this reflected the influence of her beloved husband of fifty years, Sir Richard Jolly, the development economist.

Her pragmatism together with her concerns about Madagascar’s parlous political and economic state could sometimes sustain uncomfortable involvements, such as with Rio Tinto in the development of the QMM titanium mine on the country’s southern coast. She was an advisor on the independent Biodiversity Committee set up to oversee the company’s commitment to net positive improvement in both environment and society during the life of the mine and its pledge not to cause the extinction of a species. As she said: “If you think that people and forest will somehow muddle through before the hills are scraped as bare as Haiti, then there is no reason to think that money and organization will improve life. If you look at the statistics of forest loss, you opt for the mine.”

Enjoying an idyllic childhood in Ithaca, New York, she was the child of the artist Alison Mason Kingsbury and the humorist and Cornell scholar, Morris Bishop. She quipped that since her mother knew everything about art and her father about literature, her only choice was to become a scientist. However she was herself a marvelous story teller about animal behavior, and vivacity peppers her writing, with sifakas ‘silently soaring against the blue sky in great ballet leaps’, stopping ‘to feed with no fuss or bickering’. This approach drove The Ako Series (2005/12), a ground-breaking project to protect Madagascar’s biodiversity jewels through books aimed at the country’s children, which she wrote with her Malagasy colleague, Hanta Rasaminanana.

She stood out as a tall American-in-England in her trademark Tilly bush hat, colourful necklaces and man-sized sneakers. Her gentle professional style and dislike of competition could veil her impressive achievements. She held a BA from Cornell, and a PhD from Yale. She had been a researcher at the New York Zoological Society, and the universities of Cambridge, Sussex, Rockefeller and Princeton. At the time of her death she was a Visiting Scientist at the University of Sussex. She was President of the International Primatological Society 1992/96 and received its Lifetime Achievement Award in 2010. She was awarded a Knighthood by the National Order of Madagascar in 1998 and the Osman Hill Medal by the Primate Society of Great Britain in 2008.  She received Honorary Doctorates from the University of Antananarivo and the Università degli Studi di Torino both in 2012. In June 2006, a new species of mouse lemur, Microcebus jollyae, was named in her honour, while a parcel of recently restored mining forest in Madagascar was named for her in January 2014, reflecting the hope that in so doing the people involved will be more likely to sustain it.

Her books include Lemur Behavior: A Madagascar Field Study (1966); Lucy’s Legacy: Sex and Intelligence in Human Evolution; and A World Like Our Own: Man and Nature in Madagascar (1980). Her final book, Saving Madagascar: Conservation Diaries of Alison Jolly will be published posthumously. Jolly wrote over 100 scientific and popular articles and was featured in 20 television programmes. Her writing for children included the Fiddle stories, featuring the time-travelling adventures of a young girl, modelled on a beloved granddaughter.

A wonderful, funny, enthusiastic, highly intelligent and hard-working man – Stuart was one of the miracles that have helped to keep Money for Madagascar running over the past 27 years.

Our previous treasurer had given us plenty of warning of his retirement but the date was fast approaching and no replacement had been found.  Out of the blue I got a phone call from Stuart who had spent a year as a Quaker volunteer in Madagascar in 1966.  We chatted for some time and he told me of his career as a Principal Education Officer on the Wirral, particularly concerned with the building of new schools, and said that since his retirement he had been thinking of doing some voluntary work and wanted to support our efforts in Madagascar – had I any suggestions?  Of course I had, and that was the start of eleven years of fruitful collaboration which saw the charity grow from a small organisation with just three trustees and an annual income of £67,000 to the present with eleven trustees, one paid employee and an annual income of approximately a quarter of a million pounds a year.

Stuart was full of ideas and was always keen to involve schools, from a village primary school in France to “Sewell Park College” near his home in Norfolk. MfM was already supporting “Lycee Sewell” in Tsiroanomandidy, a secondary school named after the 19th Century Quaker missionary Joseph Stickney Sewell. Upon investigation it transpired that common ancestry linked the 2 schools across 10,000km, as the Sewell Park College in Norwich, was named after none other than the cousin of Joseph Sewell, a certain Philip Sewell - engineer, banker and philanthropist, who bequeathed the grounds upon which the Sewell Park College was built.

All we needed now was a descendant of the Sewells to bring this link to life. With great enthusiasm our Trustee Chris Sewell was happy to oblige! Letters were exchanged across thousands of miles, and in 2013 the deputy head of Sewell Park Academy was able to visit Lycée Sewell to meet the teachers and students face to face.

Stuart was a creative catalyst. He was also very good at building friendships. We trust that his love and enthusiasm will live on in the many projects he initiated, such as this one.

Stuart had a highly developed sense of humour and lightened many fraught situations with a well-chosen joke.  There can’t be many people whose memorial service included a recitation of “The Lion and Albert” which produced gales of laughter from the mourners.
The last two years of his life were very difficult and he spent many weeks in hospital but he showed incredible courage and was doing his best to help MfM right up to the last week of his life when he attended a meeting of the Trustees and, though physically very frail, was able to make insightful contributions to the discussions.  We miss him greatly and are deeply grateful for all that he did for MfM and for his beloved Madagascar.

Passionate MfM supporters are hosting a recital in Dublin this month to raise funds to help impoverished children in Madagascar. Concert takings could combat sickness by paying to install a safe water supply to a school.  Donations could also combat malnutrition by equipping children with the training and tools to set up their own school kitchen garden.


If you live anywhere near Dublin please come along!

If you can't come but want to show your solidarity for this project you can donate on the MfM www.moneyformadagascar.org/make-a-donation 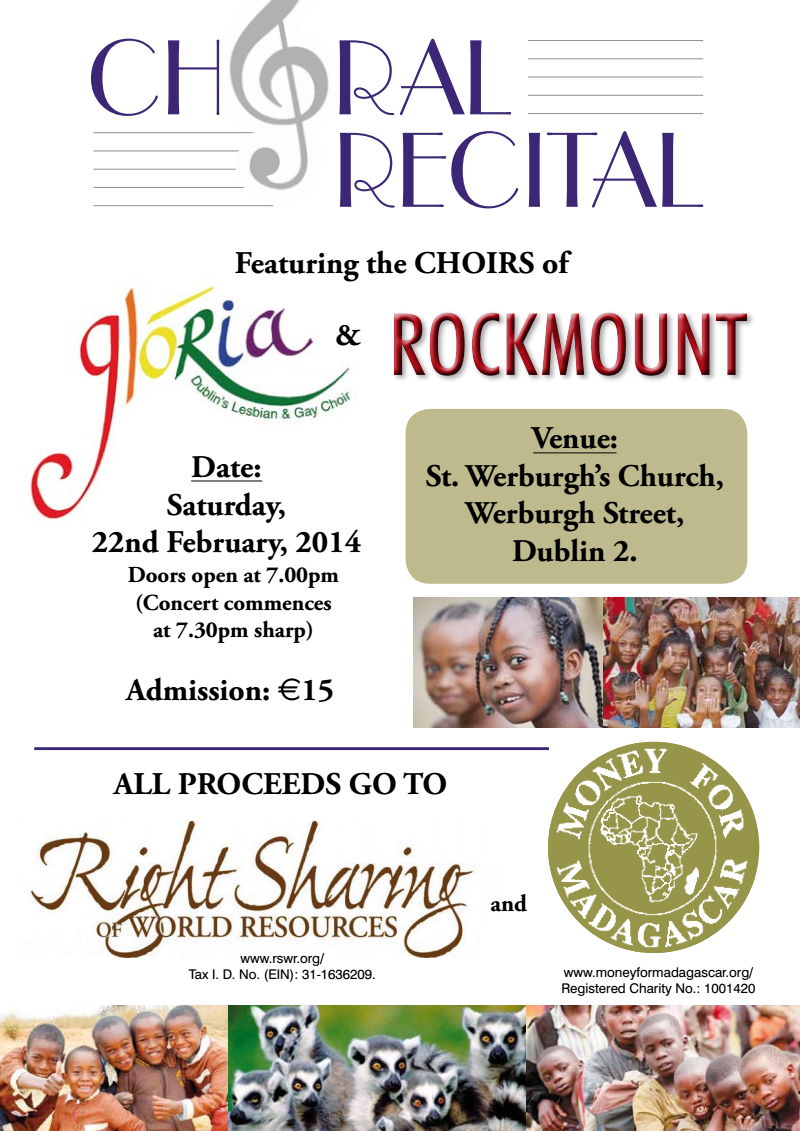