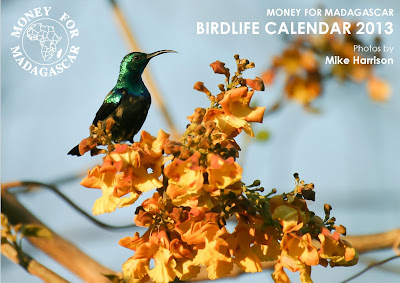 MfM has just launched its new Madagascar Birdlife Calendar 2013.  Made up of stunning photos donated by the wildlife photographer Mike Harrison, the calendar celebrates the beauty and diversity of Madagascar’s birdlife much of which, as with all the country’s flora and fauna, is endangered.


A diminutive (15cm) Kingfisher endemic to the forests of Madagascar.


The calendar also tells success stories from 26 years of Money for Madagascar’s work supporting low-cost, community led initiatives in the big red island.  The stories show the many ways in which MfM has made a radical difference to the lives of individuals, families and communities. 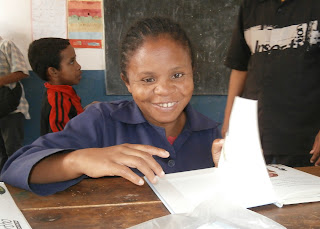 Thanks to sponsorship, Malala has a loving home at Akany Avoko and enjoys fun and  stimulating lessons at La Source Special Needs School.


This is a unique calendar that will be treasured by anyone who loves wildlife – and particularly by birdwatchers. Please feel free to copy this to birdwatching friends – or perhaps put them on your Christmas list for a calendar! Calendars are £8.50 each inclusive of UK postage & packaging or £10 to be sent outside the UK. To order a calendar please send a cheque payable to ‘Money for Madagascar’ to Madagascar Calendars, 15 Kelly’s Drive, Oxford, OX331NT.  Alternatively you can order your calendars on-line from www.moneyformadagascar.org when our new shop goes live in November.

Tales of exotic and unique species of birds in Madagascar have been around for many centuries. In the thirteenth century Marco Polo described the giant rukh of enormous size with a wing span of thirty paces and the strength to lift an elephant. This is the stuff of folklore but there is a morsel of truth in the tale from the Arabian Nights of the great egg, as big as a house, found by Sinbad the Sailor which, when broken, brought fury and destruction to his ship.  Viewers of David Attenborough’s  ‘Zoo Quest’ will recall his discovery of hundreds of broken egg shells in a dry river bed in Madagascar’s south. Painstaking reconstruction showed them to be the remnants of the eggs of the flightless elephant bird, the Aepyornis.  Ostrich-like and up to ten feet tall, it was the heaviest bird ever to have lived.
While folklore will have played its part in exaggerating the size and power of the Aepyornis, there is no doubt that the creature is now extinct. Not so with several of Madagascar’s birds today. Many, like the Madagascar Pochard, have been reported extinct only to be rediscovered in small numbers a few years later.  Several of the birds featured in the calendar are endangered and face a perilous future.
Money for Madagascar believes that a bright future awaits both the Malagasy people and the island’s rich bio-diversity if they can co-exist in harmony.  Our commitment is to strive, with your help, to make this a reality.  Each calendar sold will raise £3.50 towards changing lives and conserving biodiversity in Madagascar.