Matt Townend and his "Chain Gang" weren't the only bonkers bikers putting their bodies on the line for Money for Madagascar over August Bank Holiday Weekend. On the 26th of August brothers Andrew and Jonathan Creedon embarked on an epic commute from Andrew's London Office to his home, 270 miles away in Liverpool, by bicycle!

Over the course of three days the Creedon brothers clocked up over 25 hours in the saddle, burned off 8,700 calories, battled daunting headwinds, and, en route, raised more than £2000 for vulnerable people and communities in Madagascar!

With a total of £2286 raised to date, an impressive 91% of their overall target, Andrew said ‘I am really pleased with amount we have raised, Ecclesiastical have contributed £500 towards the total and this has made a real difference. Money for Madagascar is a small charity that predominantly helps children in in terms of providing funds for Schools, health and other support. All the money that goes to this charity gets spent in with next to nothing going on admin expenses.' 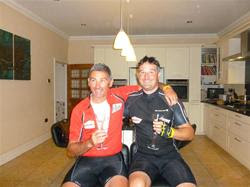 If you would like to reward Andrew and Jonathan's Herculean efforts by sponsoring them then please visit the Just Giving website:http://marketing.willis.com/lz/lz.aspx?p1=T051S20616816&CC=&w=1888&cID=0&cValue=1 and make a donation.
Money for Madagascar would like to offer our heartfelt thanks to Andrew, Jonathan and the many friends and family who helped make their expedition such a success. Your donations will make a world of difference to some of the poorest people and most precious natrual habitats in the world.

Several of our recent blog-posts have focused on the incredible fundraising efforts of supporters like the Creedon Brothers. Stay tuned for our next article that will feature the individuals and communities in Madagascar whose lives will be changed by the money raised.
Posted by Simon

We are delighted to report that Matt Townend has successfully completed his sponsored cycle ride from Land’s End to John O’Groats.  Matt set off with his two companions, Tom Firth and Dan McLachlan on Saturday 27th August and arrived, drenched from two hours of driving rain at 6.45pm on Saturday 3rd September.
874 miles in 8 days is a remarkable and extremely punishing pace. Matt was surprised when ‘The Chaingang’,  as they called themselves,   finally arrived to be told that 8 days was very unusual and that most did it in 10 !!  More respect and admiration all round!
The trio’s diary, written a few days after arriving in rain-soaked John O’Groats gives a hint of the pain and discomfort of the ride as well as the great sense of camaraderie that developed:
"Days have passed since we finally touched the sodden, lonely turf of John O' Groats - days of locomotion without the need for pedals, and seats with more substance than a cattle grid. We can still feel the chinstrap of our helmets burrowing into our throats, and perambulation remains an uncomfortable experience…….
All in all the experience was unique: eight superb days of camaraderie and hilarity tempered with healthy doses of reality, brutality and sheer exhaustion. Unimaginable before mastered and unmissable now it's done."
En route the trio had to face many challenges including infuriatingly frequent punctures, broken gears, buckled wheels, tender knees and a very sore Achilles’ heel. On the final day in the Highlands one of the team’s derailleur gears broke and had to be removed, leaving him to cycle in one fixed gear for 12 miles until rescued by a highland bike mechanic called Wim. He was, as they say, ‘a legend’. With a completely new bike they set off for a final assault on the last 90 miles. Despite an evil coastal headwind, lashing rain and some massive hills they reached John O’Groats within six and a half hours.
Our hearty congratulations and thanks to Matt for completing his amazing feat and for donation half his sponsorship to Money for Madagascar.  It’s not too late to add to Matt’s sponsorship. You can still donate on-line at: http://www.justgiving.com/matthew-townend1
Stay posted to the Money for Madagascar blog for news of the intrepid Creedon Brothers who have also been putting their legs (and saddles) on the line to raise money for vulnerable people and habitats in Madagascar in their own cycle challenge.
Posted by Simon