Hot off the Press - Hilary Bradt runs for MfM

Our patron Hilary Bradt recently completed the Bupa London 10K in 1 hour 17minutes - coming 11th in her age group (over 70)! This was an amazing feat as she had just been involved in a bad car crash the week before. 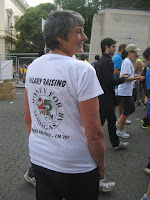 Hilary says, “After my car crash, when I had bruised ribs from hanging upside down from my seat belt, I thought I would have to cancel the run so am rather proud to have done it. I always run for the wonderful charity Money for Madagascar where ALL the money raised goes to small 'grass-roots' projects throughout Madagascar -- a place dear to my heart -- so if my accident can help them I shall be very happy.”


So please support Hilary by donating through her JustGiving Page. Donating through JustGiving is simple, fast and totally secure. Once you donate, they’ll send your money directly to MfM. https://www.justgiving.com/Hilary-Bradt1/

If you would like to know more about the ways in which Money for Madagascar is working alongside its partners please visit our website and support our work:
http://www.moneyformadagascar.org/english/
Posted by Sunita Abraham

How Can We Protect Madagascar's Tenrecs?

Imagine a world with no electricity…

Right, so I’d like you to imagine something for me: imagine a life without electricity. Could you deal with no instant hot water? No microwave meals? How would you get by for a week without internet access to do your online shopping or watch the latest episode of The Big Bang Theory? In the UK we are spoilt. Many of us take ‘the flick of a light switch’ for granted. However, Malagasy people have to deal with issues like these daily – electricity generation only covers 15% of national needs and less than 2% of the rural population even has access to it.

Let me paint you a picture of their lives and some related issues:

For cooking and heating, most rural villages rely on firewood and charcoal that the residents obtain from local forests. Obviously this involves chopping down trees and such deforestation can lead to the disappearance of Madagascar’s unique biodiversity (think! No more lemurs or cute tenrecs) as well as many other environmental problems. Cooking with charcoal also causes illness.

For lighting, more than 85% of the rural population relies on kerosene lamps. Kerosene is dangerous. It emits a toxic smoke that leads to respiratory illness. It doesn’t even provide a good light to work in and is so expensive that households spend about 30% of their income on it. Basically, it is dangerous, toxic and expensive – an all round bad choice.

Kerosene is just one type of oil that Madagascar imports. Oil is also used to produce more than half of the electricity in Madagascar. More bad news – oil is a fossil fuel that means that reserves will eventually run out. It also contributes to global warming. Remember that cyclone that recently struck Madagascar? It is just one of the consequences of climate change. Furthermore, being dependent on imported oil means that Madagascar is relying on foreign nations to provide the oil and offer reasonable fuel costs.

We need a solution that will reduce Madagascar’s dependence on oil and foreign nations, and stop the destruction of its wonderful forests and the habitat of tenrecs and lemurs. A solution that King Julian would approve of! The answer? It’s right on Madagascar’s doorstep – or rather its coastline, rivers, mountains, deep beneath the ground and skies penetrated by beams of intense sunlight. What am I speaking of? Renewable energy.

If you would like to know more about the ways in which Money for Madagascar is working alongside its partners please visit our website and support our work: