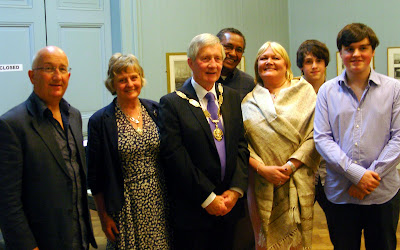 Stars of the show (left to right):

On 11th June the Williamson Art Gallery in Birkenhead echoed to the wonderful sound of music in a concert given by MfM Trustees, Supporters and Malagasy Partners.
The evening swung into song with Trustee Bernadette King, and her accompanist David Galvani performing Schubert songs, which provoked prolonged and enthusiastic applause from the audience. The second half of the concert included three pieces composed by David’s son Marco. David's younger son, Luca, also delighted the audience with his beautiful performance on the flute. Thank you boys – you surely have a great musical future !
The concert was brought to a rousing conclusion with some Malagasy piano music performed by our Partner Rahajary Tsialinarivo (a.k.a. Tse), who is the director of our Malagasy Partner NGO 'SAF'.
The evening ended with a five star buffet and a competition to guess the weight of Bernadette’s pet pig. A thoroughly good time was had by all and well over £1,000 was raised for MfM’s work in Madagascar, which is now the third poorest country on earth.
With sincerest thanks to all who made the event a great success,
Theresa Haine , Co-ordinator of MfM


Check out our 'Events' page to find out what's coming up next. Could this be your chance to get a free Bradt Guide to Madagascar?
Posted by Irenée