This is the second piece in the series by Rosemary Wilson on Preserving and Harnessing the Environment of Madagascar!

So last time, we covered some of the negative reasons behind fossil fuels and decided that a possible alternative would be to harness the power of renewable energy. Today I would like to introduce you to our first:

The basic concept behind hydro is: 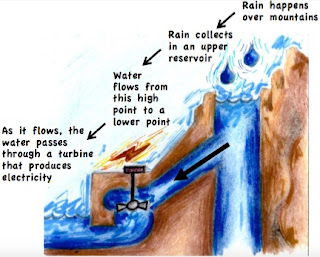 It is a fairly simple concept, though obviously like any mass power production, there is a great deal of engineering involved.

Now, at its centre, Madagascar has a high plateau and mountains. Lower narrow coastal plains surround these. So it has high and low topography. It also has rainfall – most occurs during the summer with more in the northeast than the south. Perfect.

King Julian would be doing the cha-cha right now if he knew about hydro and sending his minions out to carve ‘Hail the Hydropower’ into tree trunks!

We can surmise that Madagascar is a suitable location for hydropower to be a major source of energy. And it is - 68% of the country’s electricity is provided by 6 big hydropower plants; the rest is produced by diesel power plants. However, of course, as mentioned in my previous post, electricity provision throughout Madagascar is extremely minimal, with it only contributing to 2% of the overall energy consumption.

The problem is that Madagascar does not posses a nation-wide electricity grid. Those that do exist are mainly positioned around major towns. This means it is difficult for rural areas to access grid-based electricity whether or not it is produced renewably. You might say: why aren’t off-grid technologies being considered? The answer comes down to money. Most of the rural population relies on farming to survive and they have very little spare money to spend on expensive technologies. The Rural Electrification Agency (REA), the institution responsible for activities involving electricity in rural areas, has limited finances to promote rural electrification.

On the up side, the REA has sponsored seven small hydropower plants. BUT these are only located within a 120km radius from Madagascar’s capital city. On another positive note, 700 sites have been identified as having potential for hydro throughout Madagascar.

The situation is frustrating. Madagascar has the natural resources. The sites have been identified. As one of the poorest countries globally, Madagascar simply cannot afford the investments. This is the dilemma.

Money for Madagascar is all for sustainable development – development that meets the needs of the present without compromising the ability of future generations to meet their own needs - and renewable energy (i.e. hydropower) is one step towards it. It is not an easy task – a small charity like MfM cannot just conjour up the millions that would have to be spent on such engineering feats including building dams and extending the electricity grid. However, aiding education to the Malagasy people could encourage a more sustainable lifestyle, and simply providing a supportive face to hydropower could promote its development.

See our website (www.moneyformadagascar.org) for more info about the work that Money for Madagascar does with its partners at the grassroots.